1. General scope of the Pilot Action

The pilot action’s main purpose was to create a web map of free public outdoor recreational areas in the City of Ljubljana. Some data on sports and recreational infrastructure and areas does exist and some is publicly available, but it is incomplete and dispersed over several analogue and online sources. Meetings with the relevant departments at the City of Ljubljana, which owns and manages these areas, therefore resulted in a reciprocal wish and need to create a comprehensive, straightforward, and user-friendly web map. Presenting information in map form, especially as an interactive web application, is a very powerful way of disseminating knowledge and decision-making.

2. Specific goals and tasks to be fulfilled

To achieve goal 1, we acquired georeferenced data on recreational areas and infrastructure from the relevant municipal departments based on the signed bilateral collaboration agreement. In accordance with the project idea and purpose, as well as the scientific findings on the importance of outdoor recreation in a green environment, we limited ourselves to public, outdoor, freely accessible areas, including various types of green urban spaces. The database was created with the ESRI ArcGIS software according to a pre-prepared typology of recreational objects and by identifying the key information for users. The database was incomplete, so we supplemented it with our own mapping, field documentation and photographs.

The web map (goal 2) was launched on our own server using ESRI software and serves as an informative platform with basic information about recreational possibilities in the City of Ljubljana. We named the application ‘Out of doors, out of mind’ (‘Sprosti se na prostem!’ in Slovene). The user can use several widgets, such as the legend, list of layers, filters (for activities), a selection of base maps and the search tool. All these widgets provide the opportunity to construct the most user-friendly map possible. For example, one can turn on only specific layers and change the base map. By clicking a certain recreational facility, a pop-up window appears and provides information about the name, short description, possible activities, photo and a link to further information.

Promotion (goal 3) is an important step to stimulating more active lifestyles. With this in mind, we presented the map to the public with the story map application, which presents the contents in a visually attractive way through a story. The presentation includes additional information about a wide range of recreational and sports possibilities in Ljubljana, combined with scientific findings on the social, psychophysical and health benefits of spending one’s free time being active outdoors, especially in the nature and urban green spaces.

Since both web applications are provided in a responsive design, users can also view them on mobile phones and tablets.

3. Target groups aimed by the activities

The pilot actions is primarily intended for:

5. Expected impacts and benefits from the pilot actions

In the short-term, the web map will mostly benefit city officials and urban planners. So far, the existing maps have been incomplete and the databases dispersed; now, the map clearly illustrates, for example, areas with underdeveloped options for public outdoor recreational areas, requiring improvement. In addition, various municipal services will be able to integrate the map into their own maps and databases and update it regularly. In the medium- and long-term, the web map is projected to encourage citizens and visitors to more frequently spend time outdoors and doing sport activities.

6. Strategy to mainstream the pilot action

The promotion of the web map was also a part of the pilot action, because it was executed using story mapping, which presents the map as a story in a visually attractive way. Information on the creation of the map is being spread through various communication channels of the research centre and the municipality (websites, blogs, social networks). A public presentation of the pilot action results was performed in December 2018. The newly created database is projected to be integrated into the existing web map, so it can be updated and evolved by municipal services even after the project has been concluded. 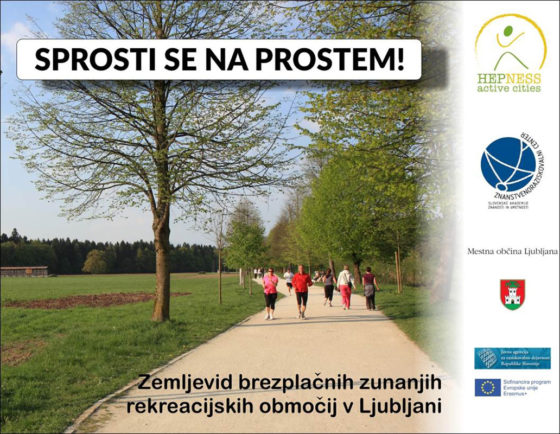 This site uses cookies to improve the navigation experience | info